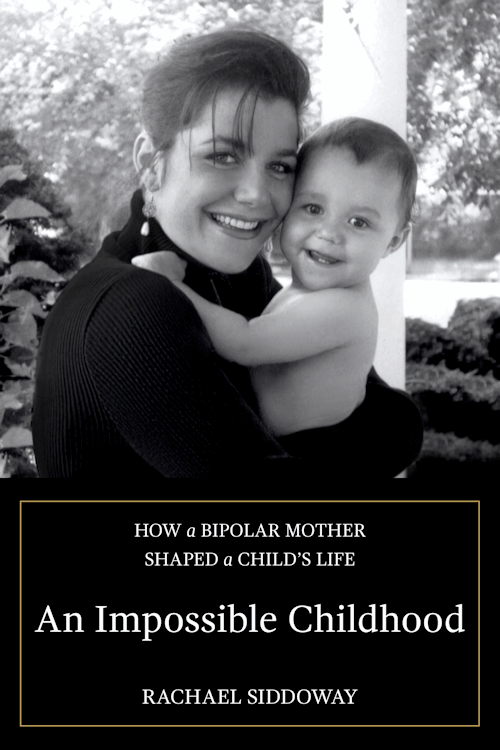 How a Bipolar Mother Shaped a Child’s Life

From the moment I was swaddled in my mother’s arms, life was explained to me with no filters or guard rails. There were no cushions to fall back on or watered-down versions to swallow. My mom always shared the truth as she saw it. The things she was honest about were rarely age-appropriate, but like most kids, I was utterly unaware where my family sat on the spectrum of normalcy until later in life. I was treated as her equal, her best friend, and that meant she shared everything with me ¬– even the realities of Santa.

“I need you to help me write a letter to Santa,” I told my mom on the way home from preschool.

“Well, you can’t write a letter to Santa.” She shook her head, quickly pulling into the McDonalds drive-through.

“Because he’s dead.” She fished out quarters from the cupholder.

“Santa’s dead?” I scrunched my face, leaning back into my car seat.

“He was a real man in history, but he died a long time ago. Dad and I buy your presents.” She rolled down her window and yelled, “I’ll get a kid’s meal and a Big Mac!” My mom then turned her head and looked at me. “I thought you knew that.”

“So why does everyone at school still write to him?” I looked at her, confused.

“Because their parents haven’t told them the truth.” She turned and grabbed the bag of food through the window. And just like that, what took most parents years to build up to happened in two minutes at the drive-thru.

For me, it wasn’t earth-shattering or shocking to learn that Santa had died, because my parents never really perpetuated the idea that he was alive. Santa and I didn’t have any history together, he was just the man in all my Christmas movies and the largest inflatable lawn decoration at Home Depot. But that was not the case for other kids, and soon, at my preschool Christmas party, that was something I was about to find out.

“How does Santa even get down the chimney?” Samantha asked, mouth full of cookie crumbs dropping on the red plastic tablecloth.

I sat and listened to my peers muse over how Santa could eat hundreds of cookies in one night, and if his sleigh was really red.

“What do you think, Rachael?” The girl sitting next to me asked. I took a big bite of my sugar cookie and drank enough milk for the chalky texture to leave the roof of my mouth.

“Santa’s dead,” I spoke up. All sets of eyes stopped and looked at me.

I sat up a little straighter, “My mom told me he was a real man, but then he died.” I knew pulling the Mom Card gave me some leverage. They looked at each other in disbelief.

“Besides, who gives the whole world presents then?” The freckled boy smugly asked.

One girl rallied the group. “Rachael’s a liar!” She shouted.

“Rachael hates Santa!” The freckled boy pointed at me.

I was ambushed, and no one believed me. I was a lone soldier in this winter war for truth, and before snack time was over, I had become the most unpopular person at my table. I gripped the sides of my chair as they iced me out and continued their festive conversation.

“What type of cookies should I leave out?” Gabby asked.

“Why?” She scrunched her face at me.

“Because she eats the cookies! And she buys the presents!” I yelled in bottled-up frustration.

“Stop lying!” She screamed in my face.

“Girls, girls, what is going on!” The teacher rushed over.

“Rachael said Santa died!” She pointed a stiff finger at me and broke down in tears.

“But it’s true!” I looked up at Ms. Allan. Say I’m right, please say I’m right! I begged in my mind. The only thing getting me out of peer isolation this Christmas was an adult testimonial, but it was one I would never get.

That winter, I was the outcast. I was left to play by myself at recess, and during reading time, I was pushed out of the reading circle. At an incredibly young age, I was forced to learn how to navigate the volatile seas of not having a typical mother. And most waves were not as inconsequential as burying Santa.